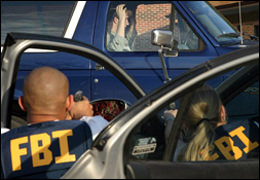 National Security responsibilities aside, post September 11th the FBI continues to play a key role combating violent crime in major metropolitan areas and local communities throughout the United States.  Accordingly, members whose background also includes FBI Violent Crime can be a great asset to someone looking for an investigator and/or needing an expert concerning Violent Crime.

Concentrating on crime problems that pose a significant threat to society, the FBI looks to aid local police agencies whose resources can be seriously taxed when incidents like mass killings, sniper murders and/or serial killings occur that can easily paralyze a community. Placing an emphasis on criminal street gangs, bank robberies, carjackings, and kidnappings in the violent crime program, the FBI also investigates interstate transportation of stolen property, assaults, and threats of assault on the president and other federal officers and the theft or destruction of government property, as well as investigate crimes against children, art theft, locates and arrests dangerous fugitives, and conducts investigations concerning crimes on Indian reservations.

Looking at the gang problem, the FBI estimates that approximately 33,000 violent street gangs, motorcycle gangs, and prison gangs operate in the Unites States with members totaling approximate 1.4 million individuals. Many gangs are thought to be very sophisticated and well organized, using violent crime to make money and control neighborhoods, e.g. robbery, drug and gun trafficking, prostitution and fraud. Because gang members continue to commit crimes even after being sent to prison, the FBI attempts to disrupt and dismantle the gang organizations through intelligence driven investigations using violent crime initiatives and partnerships such as the Safe Street Task Forces located in many cities, the National Gang Intelligence Center, and the MS-13 National Gang Task Force.

Under the violent crime program, the FBI also has statutory authority to locate and arrest fugitives who have fled state jurisdictions having been charged with a felony. At any given time, agents are looking for at least 6500 fugitives—some wanted on felony charges having been charged in other countries. In 1950, in coordination with the national news media and the violent crime program, the FBI launched its Ten Most Wanted Fugitive campaign publicizing fugitives who might not otherwise be recognized, but for the media. The successful program has caused 497 dangerous fugitives to be placed on the Ten Most Wanted list, with 466 of them being located or apprehended—many through citizen cooperation as a result of the media campaign.

The FBI also has responsibility for investigating violent crime in Indian Country, including murder, child sexual abuse, violent assaults, drug trafficking, gaming matters and public corruption. Nationwide, the FBI has investigative responsibilities for some 200 federally recognized Indian reservations, with more than 100 agents working full time on Indian Country matters in the violent crime program in 19 of the Bureau’s 56 field offices.[1]

Members listing FBI Violent Crime as a skillset can be very helpful to law firms, security professionals and journalists interested in Violent Crime needing an investigator and/or wanting an expert looking to locate/interview witnesses, obtain a professional opinion and/or provide media commentary.  Asked to review evidence involving a Violent Crime, members whose skills include FBI Violent Crime can analyze digital evidence, provide testimony and/or when solicited produce an affidavit documenting policies and procedures.  Besides having an expertise concerning FBI Violent Crime, these members also have important organizational, analytical and reporting skills, necessary to examine evidence and/or interview witnesses.

Retired FBI Agents and Analysts, interested in securing a Directory listing and/or a personal email address who have a background that includes FBI Violent Crime, need only submit a brief online application to join the website.