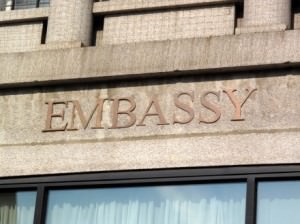 Located throughout the United States and Puerto Rico, the FBI has 56 Field Offices and 400 satellite offices known as resident agencies where agents / analysts conduct investigations and collect intelligence.  In addition to its field offices, the FBI has representatives stationed abroad in 64 offices, each headed by a Legal Attache.  The Bureau also maintains approximately a dozen smaller sub-offices in key cities around the globe, extending its international reach to more than 200 countries, territories, and islands.

Established through mutual agreement with a host nation, Legal Attache offices are generally situated in a U.S. Embassy or a Consulate Office.

The mission of the Legal Attache program is to establish and maintain liaison with a host nation’s principal law enforcement authority and intelligence/security service.  The liaison enables the FBI to effectively meet its responsibilities concerning organized crime, international terrorism, foreign counterintelligence, and criminal justice.

The Legal Attache program is managed by the International Operations Division at FBI Headquarters in Washington, D.C. which is also responsible for maintaining liaison with Interpol, various foreign security service officers and police stationed in Washington, and national and international law enforcement associations.  International liaison and information sharing are conducted in accordance with executive orders, laws, treaties, the Attorney General Guidelines, FBI policies, and inter-agency agreements.

Historically speaking, the Legal Attache program was born when President Franklin D. Roosevelt concluded the United States had a need to better understand the looming war threat posed by the Axis powers [Germany, Italy and Japan].  With no Central Intelligence Agency [CIA] in existence, responsible for domestic intelligence, the FBI was was assigned to collect intelligence in the Western Hemisphere since it was believed Nazi Germany was using Central and South America as a staging area to send spies into the United States.  Consequently, in June 1940, the FBI established the Special Intelligence Service [SIS] deploying agents to identify Axis spy networks.  In 1941, the U.S. Ambassador in Columbia requested that the FBI assign an agent to its embassy in Bogota which proved to be the forerunner of the FBI’s Legal Attache program.  By 1942, the FBI had agents stationed at U.S. Embassies in London, Ottawa and Mexico City who were officially positioned as diplomats and given the title Legal Attache.

For more than 75 years now, the FBI has positioned agents and other personnel overseas, using the Legal Attache program, to build relationships with principal law enforcement, intelligence, and security services in host nations to ensure a prompt and continuous exchange of information, helping Americans both abroad and at home.  Interested in more information about the FBI’s Legal Attache program just visit the FBI’s website.

Directory members can be extremely helpful to anyone seeking information and/or requiring a professional opinion concerning the FBI’s Legal Attache.  Looking for an expert concerning investigations or actions taken by the FBI’s Legal Attache, using the website’s search feature, just enter the appropriate skill, issue, or need and/or geographical area of preference and thereafter make contact with the listed FBI specialist/using the information provided.

Retired FBI Agents and Analysts with backgrounds in the Legal Attache program, interested in securing a Directory listing and/or a personal email address, need only submit a brief online application requesting membership to join the website.