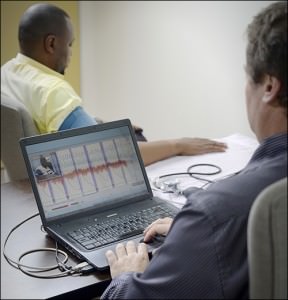 Pursuing a medical degree, attending the University of California at Berkeley and moonlighting at the Berkeley, California Police Department, JOHN AUGUSTUS LARSON theorized using blood pressure and combining it with some other measured physiological responses he thought a test could be developed for use detecting deception when someone was answering questions concerning guilt or innocence.[1]  Credited with inventing the “modern polygraph,” and arguably the nation’s best known polygraph examiner, LARSON thought WILLIAM MOULTON MARSTON was right when he suggested his systolic blood pressure test could be used to determine deception.[2] Obtaining a Ph.D. in physiology, at Berkeley, in 1920, he joined the police department interested in pursuing a career in forensic science.[3]  Studying biology, LARSON’s academic pursuits began in Boston University where he earned a Master’s Degree in Science, in 1915—writing a thesis on Fingerprint Identification.

Known as the “Father of the Polygraph,” MARSTON’s theory became kindled when his wife suggested her blood pressure seemed to climb whenever she was mad or excited—drawing a connection between emotions and blood pressure. Using a cuff called, “a sphygmomanometer,” he thought taking a person’s systolic blood pressure during questioning, interrogators [ polygraph examiner ] might determine whether someone was lying. Educated at Harvard University, receiving a BA in 1915, an LLB in 1918, and a PhD in Psychology in 1921, he later refined his theory suggesting respiration was a second physiological measurement that could be used to detect deception—using an anemograph to record respiration cycles. The sphygmomanometer and the pneumograph were two distinctly separate instruments. Because the method involved a stop/go process, i.e. ask a question/take a measurement, his process was called the “discontinuous method” for detecting deception.

Encouraged by AUGUST VOLLMER, Berkeley’s Police Chief, to pursue his theory, LARSON combined MARSTON’s systolic blood pressure test with physiology measurements for pulse and respiration, making an instrument which he said could detect deception. Analyzing a chart produced by the device, using disparities in physiology measurements, he said a polygraph examiner could determine when someone was lying. Because his instrument concurrently recorded a person’s physiological responses—using pulse, blood pressure and respiration—contrasting the unit with MARSTON’s device, proponents described the process as a “continuous” method versus “discontinuous.” Displaying the physiological measurements using a chart, in time the apparatus became known as the “polygraph,” with the data being interpreted by person called a polygraph examiner.

But long before the device was called a “polygraph” machine, and individuals using it polygraph examiner [s], media accounts dubbed the apparatus “a lie detector,” something LARSON hoped to avoid. Wanting law enforcement support, LARSON claimed he was more interested developing a methodology for detecting deception than “inventing” a lie detector. But LARSON was “not” without fault, since he was known to court journalists–wanting to publicize his polygraph machine. Working with the San Francisco Post and Call, a publication owned by WILIAM RANDALL HEARST branded by critics for creating “yellow journalism,”[4] LARSON agreed to use his instrument to test WILLIAM HIGHTOWER—then charged with murdering a San Francisco priest. Reporting his findings, the newspaper said HIGHTOWER was “guilty,” and called LARSON’s device, “impartial science.” A graph reflecting the falsehoods was prominently displayed in the paper with arrows highlighting HIGHTOWER’s lies.

Berkeley’s Police Chief praised LARSON and his instrument which he called a “cardio-pneumo psychogram.” But wanting to sell newspapers at a time when “yellow journalism” reigned—many publications called the device “a lie detector.”

Offering his services as a polygraph examiner, LARSON’s case files reflected his polygraph machine solved numerous murders, robberies, thefts and sex crimes. Covering his exploits as a polygraph examiner in the Gangster Era during the 1920s and 1930s, because many couldn’t pronounce “Sphygmomanometer,” the press corps nicknamed his device “Sphyggy.” In 2003, the Encyclopædia Britannica listed the polygraph as one of the greatest inventions of all time, including it on a list with 325 other inventions. Commensurate with its affect the device has had on law enforcement, security and collecting intelligence, LARSON’s polygraph is now on display at the Smithsonian Institution in Washington, DC.

Any polygraph examiner who is a retired FBI Agent and/or Analyst, interested in securing a Directory listing and/or a personal email address, need only submit a brief online application to join the website.