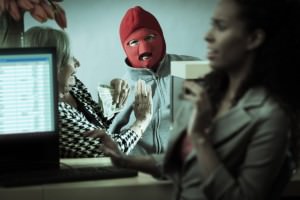 While banks have long been considered a target for individuals thinking banks are an easy score, police logs reflect only a small minority of felons actually succeed fleeing the bank, as scores of police descend on the crime scene, alerted a bank robbery has occurred.  Asked why he liked to rob banks, the notorious WILLIE SUTTON once explained “because that’s where the money is.” Sitting in a jail cell, however, SUTTON’s answer left the journalist somewhat incredulous, having provided no explanation reflecting on the wisdom making such a decision.

An “inherently simple crime … [requiring little or no] equipment or preparations, just a bank, a hand gun or the threat of one, and someone crazy enough to try it,” writing for The Kansas City Star DUGAN ARNETT told his readers, “the risk reward quotient … [makes it a] doomed venture,” citing the less-than-stellar chances getting away with the crime, the stiff federal penalties if caught, and the amount of money actually gained.  And some in law enforcement think today’s band of crooks have read the tea leaves.  According to the FBI’s Uniform Crime Report during the 10-year period ending 2014, bank robbery violations are down, reporting 7,556 incidents in 2004 and only 3,961 incidents in 2014, with most bank robbery occurrences solved by law enforcement.

Historically speaking, the FBI was made the primary agency responsible for bank robbery violations because gangsters like BONNIE & CLYDE and JOHN DILLINGER had captured the public’s attention–evading police–committing robbery after bank robbery.  Listening to constituents, in 1934, Congress made bank robbery a federal violation giving the FBI jurisdiction in any incident involving a national or state member bank of the Federal Reserve.  Officials later amended the bank robbery statute to include bank burglary, bank larceny and other bank related offenses.

Today, unless a bank robbery is classified as being committed by a serial bank robber and/or the bank robbery involves special circumstances like a teller being assaulted, local law enforcement generally handles the prosecution.

Members can be extremely helpful to anyone seeking information and/or requiring a professional opinion concerning a bank robbery suspect or incident. Looking for an expert, visitors need only use the website’s search feature, entering the appropriate skill, as well as the interested geographical area to make contact with an FBI specialist and, thereafter, make contact using the information provided.