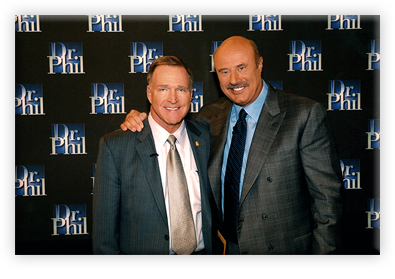 LOS ANGELES–When “not” producing Perry Mason like drama scenes for Dr. PHIL or OPRAH, member JACK TRIMARCO can usually be found peering over polygraph charts, or conferring with attorneys seeking information about whether a client “passed” or “failed” a polygraph exam.   A recognized polygraph expert, TRIMARCO is a celebrity with the afternoon television crowd, captivated he can tell whether someone is “lying” using a polygraph machine.

Not familiar with the polygraph machine, the instrument measures a person’s physiological responses answering questions of guilt or innocence which then must be interpreted by professional polygraph examiner.

In one instance, in 2012, Dr. PHIL invited KELLY OSBORN and her daughter’s former fiance, JOE GENOESE, to appear on his television show. OSBORN is the mother of SHEENA MORRIS, an attractive blonde, age-22, found 2009 New Year’s Day hanging in a shower stall at the Braedenton Beach Hotel located in the Sarasota-Tampa area.  KELLY thinks her daughter was “murdered,” suspecting GENOESE.  Asked about the case, GENOESE denied killing MORRIS and prosecutors declined to file charges.

Agreeing to discuss the case, GENOESE consented to taking a polygraph exam with the results revealed on Dr. PHIL’s show. With cameras rolling, Dr. PHIL revealed to his audience GENOESE “failed” the polygraph.  Asked to respond, GENOESE denied he had anything to do with MORRIS’s death.  Called the country’s “top” polygrapher by Dr. PHIL, asked to comment TRIMARCO tells the audience GENOESE was found “deceptive” taking the polygraph, adding authorities should have considered him a “suspect” in the investigation.

Trained at the Department of Defense’s Polygraph Institute, now called the, “National Center for Credibility Assessment (NCCA),“ TRIMARCO’s credentials include completing their 14-week polygraph program, and during period 1990 thru 2012, attending more than 50 polygraph training seminars given by the FBI or one of the professional polygraph associations in which he is a member.

Respected by prosecutors and criminal defense attorneys alike, speaking with the VENTURA COUNTY STAR, former Ventura County District Attorney [VCDA] MICHAEL BRADBURY says, “[TRIMARCO was] one of the guys who before he … hooks you up to a machine, you’ve told him just about everything.”[2]  Citing the OKLAHOMA CITY BOMBING, Los Angeles attorney ANTHONY BROOKLIER said when agents thought they identified TIMOTHY McVEIGH’s accomplice detonating the bomb, TRIMARCO told his colleagues it wasn’t so stating he passed the polygraph.[3]  When a man confessed to killing an infant, slamming the baby into a wall, he told one journalist he couldn’t sleep for a week … not allowed to tell anyone except the man’s lawyer … bound by silence because of his legal obligations.[4]

Making sure our nation’s scientists were “tight” lipped about nuclear research, during period 2000 thru 2002, he was also responsible for administering the polygraph program used by the U.S. Department of Energy.  An “accredited” polygraph expert, TRIMARCO’s certifications include The American Polygraph Association [APA], The California Association of Polygraph Examiners [CAPE], and The American Association of Police Polygraphists [AAPP].[5]

[5] Information contained herein can be found in JACK TRIMARCO’s profile at:  https://fbiretired.com/agent/200/