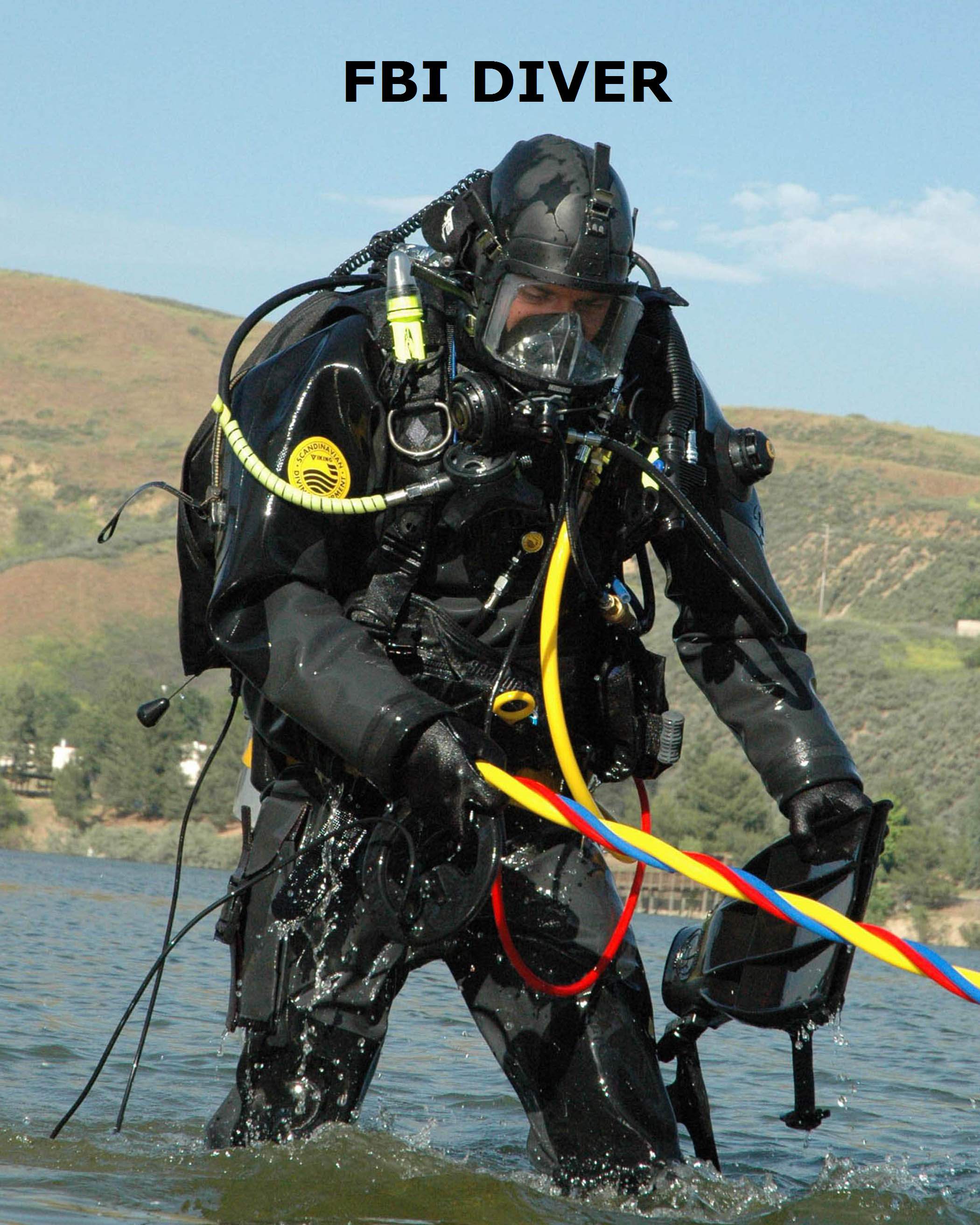 Born in New York.  In September 1987, CHACON entered the Bureau through the FBI’s New York Division.  Initially, working criminal cases, he joined the FBI Underwater Search Team in 1995.  A water man, he soon became the team’s first full time dive leader and was instrumental in setting up search protocols for the FBI Underwater Search Team collecting evidence.  And working with FBIHQ, helped established the FBI’s Underwater Forensic Program collecting evidence.  His experience includes being deployed as a diver in the 1996 Summer Olympics in Atlanta,  assisting search and recovery efforts concerning the explosion TWA Flight#800 and a 9-month TDY assignment to Athens, Greece to assist with the 2004 Summer Olympics.

Reviewing a 1982 news account of the CBS murders’ case, CHACON said searching the WACKAACK CREEK [a coastal tributary whose tidal flows are influenced by New Jersey’s RARITAN BAY], the ad hoc FBI Underwater Search Team made an important discovery.  Buried in the brown mud, Bureau divers found two [2] spent .22cal shell casings.  While the FBI Underwater Search Team hoped to recover the silencer and the .22cal pistol used just days earlier to execute a woman and three [3] CBS employees, finding the shell casings … agents were able to identify a suspect.  Witnesses said the CBS technicians were killed when they stumbled on the crime scene, not realizing a woman had just been assaulted.[1]

Walking to their parked cars, police said the men encountered a dark shadowy figure placing a woman’s limp body into a van.  “What did you see,” witnesses said the assailant shouted?  But then not waiting for an answer, the lone gunman shot the nearest CBS employee dead and then pursued the other two [2], shooting each in the back of the head as he caught up to them.  Having placed the woman’s body into a van, he then zipped past parking lot attendants—speeding down a winding narrow ramp and swiftly escaped into rush hour traffic.  Responding to 911-calls about shots being fired, police quickly discovered the grisly murder scene, finding three [3] dead CBS workers, along with spent shell casings scattered on the ground, and several other items of evidentiary value, including the woman’s sunglasses and shoes discarded on the pavement and several blood stains suggesting the woman had been wounded.[2]

Searching the steel and concrete structure jutting out into the Hudson River located at West 54th Street and 12th Avenue [Pier-92], police found three [3] spent .22cal shell casings near the three [3] dead CBS workers.[3]  The woman’s body was found in lower Manhattan, dumped in an alley.   She had been shot in the head with a .22cal bullet.[4]  The woman was identified as MARGARET BARBERA, the former Controller at the CANDOR DIAMOND COMPANY [CDC],[5] who only 18-days earlier[6] had agreed to testify against the company’s CEO, IRWIN M. MARGOLIES, suspected of defrauding almost $6 million from the company’s creditors including the JOHN P. MCGUIRE & COMPANY.[7]

Discovering BARBERA’s body, authorities reopened the investigation concerning JENNY SOO CHIN, another former CANDOR employee and bookkeeper,[8] who only months earlier disappeared after a meeting with BARBERA.  Her blood stained vehicle was found in Manhattan’s Lower Westside and inside the car, police found a like spent .22cal shell casing, which lab experts said was fired from the same gun that killed the CBS employees.[9]  Unlike BARBERA, police never found CHIN’s body.

Within days of the murders, agents and police started looking at DONALD J. NASH, age-46, residence 81 Creek Road, Keansburg, NJ as a possible suspect.[10]  Using the alias DONALD J. BOWERS, agents discovered he rented the parking space next to BARBERA.  On the evening the murders occurred, authorities said NASH waited for her in the garage—sitting quietly in his van.[11]  Wanting BARBERA to enter the vehicle from the passenger’s side, making it easier to grab her, police said NASH jammed the lock on the driver’s side with thin wooden slivers.[12]

Thinking they needed more evidence, agents targeted NASH using a multi-state Bureau surveillance team when, agents said, he was arrested by the Kentucky State Police [KSP] driving the suspect van.  Searching the van, agents recovered another .22cal shell casing which experts said also matched the shell casings found in the garage, CHIN’s abandoned vehicle and the WACKAACK CREEK located behind NASH’s home in Keansburg, NJ by the FBI Underwater Search Team.[13]  Executing a search warrant in the home of NASH’s nephew, THOMAS DUANE, police said they also recovered another .22cal shell casing that matched all the other shell casings, which experts said was fired from the same gun used in all four [4] slayings and CHIN’s presumed homicide.[14]

Following a lengthy trial, NASH was found guilty of executing BARBERA and murdering the three [3] CBS employees using a .22cal pistol.  He was also convicted of conspiring to kill JENNY SOO CHIN, the former bookkeeper at CONDOR whose body was never found.  At sentencing, the judge ordered NASH to be incarcerated in state prison for a minimum period of 100-years.[15]  Prosecutors said MARGOLIES paid NASH $16,000 for executing BARBERA and CHIN and an additional $5,000 for killing the three [3] CBS employees.[16]

Pleading guilty to defrauding MCGUIRE, a U.S. District Court Judge sentenced MARGOLIES to a prison term totaling 28-years, with his wife MADELEIN pleading guilty to several lesser charges serving a three [3] year prison sentence.  MADELEIN was not charged with either contract killing or the CBS murders.[17]

Locally, MARGOLIES was prosecuted for killing both MARGARET BARBERA and JENNY SOO CHIN and conspiring to have them murdered.  The Indictment identified NASH as being the contract killer who murdered BARBERA, but he was not listed as being CHIN’s killer.  In a second indictment MARGOLIES was also prosecuted for conspiring to kill DAVID BLEJWAS, the attorney for the MCGUIRE COMPANY who vigorously pursued litigation against MARGOLIES in the CANDOR bankruptcy.  Presenting their case, prosecutors said MARGOLIES made a $2,000 down payment to initiate the plot to kill BLEJWAS stating the agreement called for the killer to get $15,000.  Federal authorities identified the purported killer as an inmate serving time with MARGOLIES in New York’s Metropolitan Correctional Center.[18]

Not previously disclosed, trial testimony reflected in an effort to derail the federal investigation alleging MARGOLIES had defrauded creditors, prosecutors said it was MARGOLIES’ attorney, HENRY OESTERICHER, who made arrangements with NASH to have BARBERA and CHIN killed because they thought the women had agreed to cooperate with federal authorities and testify against him.  Despite destroying records, MARGOLIES thought BARBERA had other records indicating he orchestrated the fraud scheme.  Given immunity OESTERICHER testified against MARGOLIES stating at his behest he hired NASH to commit the murders.[19]

Following his conviction, on June 21, 1984, a NY State Supreme Court Judge sentenced MARGOLIES to two [2] consecutive terms of 25-years to life [or 50-years] for murdering the two women, and a third concurrent sentence totaling 8 to 25-years for the conspiracy. The state prison sentences were to run only after MARGOLIES was released from federal custody for engineering the fraud scheme.  Unlike NASH, he was not prosecuted for the CBS murders and he was “acquitted” on the charges he conspired to murder BLEJWAS, the attorney who pursued allegations he defrauded creditors in the CANDOR bankruptcy.

Finding the aforementioned .22cal shell casings was a pivotal moment for agents looking to establish a full-time FBI Underwater Search Team, since it was first time the Bureau officially used its ad hoc team to conduct a criminal investigation.[20]  Discovered in the WACKAACK CREEK, the .22cal shell casings found by agents greatly bolstered evidence suggesting NASH was the trigger-man in the slayings—making the case the Bureau needed an FBI Underwater Search Team to collect evidence and conduct investigations.

Before the MARGOLIES case [and the CBS murders], the ad hoc FBI Underwater Search Team had only been used to assist agents conducting security and organized crime investigations—needing assistance conducting technical surveillance which generally was not discussed or disclosed in court.  But with five [5] people being executed, including two federal witnesses and three bystanders, Bureau executives became convinced they needed an FBI Underwater Search Team, particularly when they realized—recovering evidence—agents needed protocols so they could work safely and effectively in a dangerous environment, whether it be in the deep ocean, a tidal swamp like the WACKAACK CREEK, or the dark murky waters of a deep river or lake.