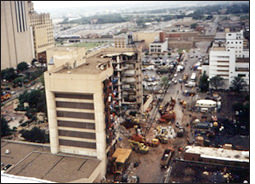 SACRAMENTO–Alleging his brother died in an interrogation gone awry, the SALT LAKE TRIBUNE reported U.S. District Court Judge CLARK WADDOUPS heard testimony in which a Utah lawyer has accused the FBI and the Justice Department with continuing to withhold information.  Seeking information under the Freedom of Information Act [FOIA], attorney JESSE TRENTADUE said the FBI had an obligation to produce the records.  Seeking a court order, he asked Judge WADDOUPS to allow him to conduct his own personal search, looking for records and evidence in field offices located in Oklahoma City and Los Angeles.

Denying the allegations, however, prosecutors say TRENTADUE was given the documents, stating the FBI has released 30 tapes and 200 pages of information.  Speaking to Judge WADDOUPS, Justice Department attorney KATHRYN WYER said the evidence will show the FBI acted reasonably conducting the searches and any new searches wouldn’t reveal additional records.

TRENTADUE’s FOIA request concerned records related to the 1995 bombing of the ALFRED P. MURRAH building in which 168 people were killed. He maintained the Government has a tape showing that two men exited a Ryder truck shortly before the explosion and another reflecting bomber TIMOTHY MCVEIGH being arrested in a car stop by the Oklahoma Highway Patrol which the feds hadn’t turned over.

TRENTADUE admits the Government has provided him with a tape concerning the Ryder truck, but not one in which he can see the truck’s occupants, and he said the tape reflecting McVEIGH’s arrest begins long after he was taken into custody.  He said publically available documents and news reports suggest more documents and evidence exist which he has not been given.   The suit was filed in 2008.

In the event Judge WADDOUPS concludes the Government’s review was “not” adequate, prosecutors asked that the FBI be allowed to conduct any additional searches—not TRENTADUE.  The Utah attorney expects the records will shed light on the death of his brother who died in an Oklahoma City jail cell—just months after the bombing.

A convicted bank robber, KENNETH TRENTADUE, age-48, was found hanging in his cell having been arrested on an alleged parole violation.  Police said he used torn bed sheets to tie a noose.  The coroner has ruled the death a suicide, but family members’ claim TRENTADUE was mistaken for the bombing conspirator dubbed John Doe number 2, believing guards strangled him, in an interrogation that got out of hand, using a pair of plastic handcuffs.

In testimony before Judge WADDOUPS, FBI support personnel testified they did computer and manual searches looking for the requested material.  One witness maintained she didn’t find the dashboard video taken by the Oklahoma Highway Patrol because it had been returned to the agency, but she did get a copy of the tape, stating she gave it to the attorney.  Because the dashboard cam had only been recently installed, she said the trooper explained he didn’t know how to use the camera, commenting he only managed to turn the camera on after McVEIGH was arrested.

Both women testified they believed the searches identified all the evidence in question, but under cross-examination one woman admitted she only conducted searches in the OKBOMB file maintained in an Oklahoma warehouse, and not records maintained at FBI Headquarters in Washington, D.C.

Contradicting prosecutors, TRENTADUE said while attempting to obtain copies of some OKBOMB evidence in 1995, an unnamed reporter indicated he was told a video tape and 300 documents were stored in FBI Headquarters, but the agency refused to release the material citing the ongoing investigation/prosecution—suggesting the women’s searches might “not” have been adequate.

Both TIMOTHY McVEIGH and TERRY NICHOLS were prosecuted for the bombing with McVEIGH being executed following his conviction in 2001.  NICHOLS was sentenced to life imprisonment and is currently housed in the U.S Penitentiary’s maximum security facility in Florence, Colorado.

Sparking an email conversation in a closed network, one retired FBI agent said TRENTADUE’s claim was based on an erroneous report filed by someone in the Secret Service who said a video tape had been secured reflecting McVEIGH and another person exiting the Ryder truck just moments before the explosion.  Intimately familiar with the investigation, but not being identified for security reasons, speaking about the erroneous report, the retired FBI agent said the only video the FBI had concerning McVEIGH and the Ryder truck was a video clip taken by a lobby camera installed in the Regency Tower Apartments showing McVEIGH loitering for 26-seconds on NW 5th Street before driving the half-block to the MURRAH building where the explosion took place.  Examining the video, he said agents could “not” determine who was driving the vehicle or how many occupants were in the truck.  He said agents could not see through the truck’s window.  Two other “retired” agents also involved with the investigation agreed with the assessment.

Joining the email thread, another retired FBI agent said the individual dubbed John Doe number 2 was not a suspect, but rather a potential witness seen near the Ryder facility about the time McVEIGH picked up the truck.  Located along an isolated spot not far from the interstate, the retired FBI agent said he had a police artist draw a composite sketch of the person.  Since McVEIGH didn’t leave a vehicle, he said agents thought somebody dropped him off.

Alerted to the FBI’s investigation and fearful he might be arrested by a SWAT team, NICHOLS surrendered to local authorities in Herrington and later was arrested and charged with the crime following his interview with FBI agents.

The retired FBI agent said McVEIGH was located as a result of agents conducting an offline search of the records maintained by the National Crime Information Center [NCIC] discovering he had been arrested by the Oklahoma Highway Patrol during a car stop and was incarcerated in a jail cell in Perry, Oklahoma.  The arrest took place just 80-miles north of Oklahoma City less than two hours after the bombing.