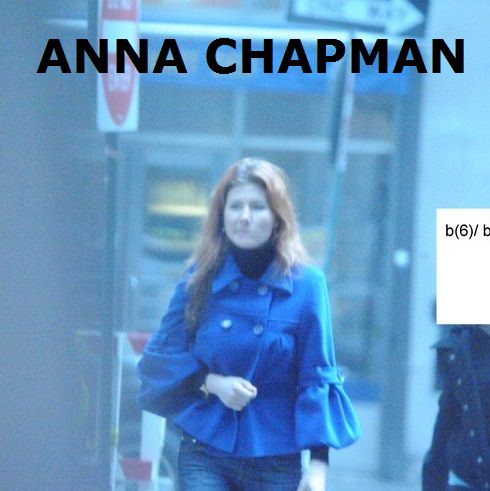 SACRAMENTO–Wearing dark glasses and dressed casually, ANNA CHAPMAN sat anxiously, as she closely eyed the man she just met.  She was concerned.  CHAPMAN was in the United States “illegally.”  An agent with the SVR, Russia’s Foreign Intelligence Service, she was required by law to register with the U.S. Justice Department as a foreign agent, but hadn’t.[1]  Calling only hours earlier, the man identified himself as a colleague commenting he worked at the Russian consulate.  He said they needed to meet.  He had to give her something … stating the matter was urgent.

Surprised and unsure, CHAPMAN wanted to put the meeting off.  She didn’t know the individual calling and the contact violated protocol.  She wondered whether she had been compromised.  If the FBI had discovered the network, she knew counterintelligence agents were watching … her options were limited.  She couldn’t flee … try to catch a plane and go home.  Agents could arrest her at the airport.  She thought she needed to make a personal assessment … agreeing to meet the caller.

But unbeknownst to CHAPMAN and her confederates, as she feared, she and her associates had been detected by FBI counterintelligence agents analyzing intelligence reports concerning the Russian Federation.  The reports suggested the SVR was using “deep cover” agents to compromise Government officials responsible for developing and making U.S. policy.  Wanting to recruit agents, the SVR hoped their agents could turn some Government officials–making them double-agents.  Meeting with CHAPMAN FBI counterintelligence agents expressed hope they might learn something new about the network—before shutting it down and making arrests.[2]

Not wanting to disappoint, but obviously uncomfortable, CHAPMAN told the undercover agent she “need[ed] to get some more information … before … [she could] talk.”  Not put off, the undercover agent replied he worked in the same department as she, but was assigned to the New York consulate.  Trying to gain her trust, he said he knew CHAPMAN was returning to Moscow in two weeks and was having difficulty with her laptop used to communicate with her cohorts.  He offered to get the laptop fixed commenting the consulate could do it, or she could get it fixed when she returned to Moscow.

Convinced for the moment, CHAPMAN gave the undercover agent the laptop computer and agreed to deliver a fictitious US passport for use by another “illegal.”  She also said she would meet the following day—agreeing to meet at a designated spot—using a special signal.

Following the meeting, however, still suspicious, FBI counterintelligence agents observed CHAPMAN purchasing a new cell phone that couldn’t be “tapped,” and two [2] calling cards for use making international calls.  And contrary to discussions with the undercover agent, she did not meet with him the following day.

Believing she made contact with her SVR handler—learning the meeting with the FBI undercover agent was a ruse—counterintelligence agents arrested CHAPMAN, along with nine associates, charging them with being “illegal” Russian agents in the United States.[3]

Reminiscent of the Cold War, approximately one [1] month later, decried as Russian spies, CHAPMAN and her associates appeared before U.S. District Court Judge KIMBA M. WOOD and pled guilty to being “unregistered” foreign agents and, in accordance with an agreement, exchanged for four [4] Russian intelligence agents in custody, suspected of being assets for the West.  The spy swap took place on a hot airport tarmac in Vienna, Austria with the Russian and American planes sitting close to one another–closing  yet another stormy chapter in East-West relations.[4]